(1) an aesthetics of the suspension of judgment that – in terms of William Blake’s image – “cleans the windows of perception, making everything appear as it really is: infinite”; and
(2) a type of art whose forms and means facilitate the spontaneous occurrence of such suspension, and whose function could be defined in terms of what Tàpies has said with respect to the social function of his own painting: to allow the spectator of the work to have access to a higher level of experience (or knowledge, although not in the common sense of the term) by means of a brilliant experience, like a sudden initiation into the experience of Zen Buddhism. Elías Capriles

I feel deeply connected to these words and this definition of arts. I might have worked towards that all the time, but as just have read this now, I would like to quote it – as the ultimate goal in arts – in reference to my philosophical and spiritual understanding. Though it will only work if in the moment of creation this idea or concept is absent, for another presence from where I am working from.

2002 – 07 Inclusion of works in the Joho Gallery, Tuebingen, Germany 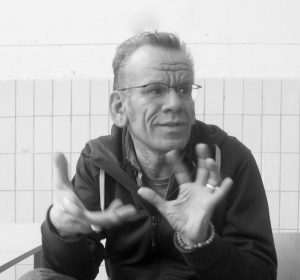 Since 2001 professional freelance artistic activity in media interplay between abstract drawing and staged photography, conceptual idea, which can include calculated coincidence and compositional visuell thoughts and expressions, which are perceptibly connected with the sound of music, as well as image ideas, which are designed for interaction with people, dancers, actors and myself and the environment. Improvisation and spatial awareness (space-consciousness) are elementary terms for my way of working as an artist.